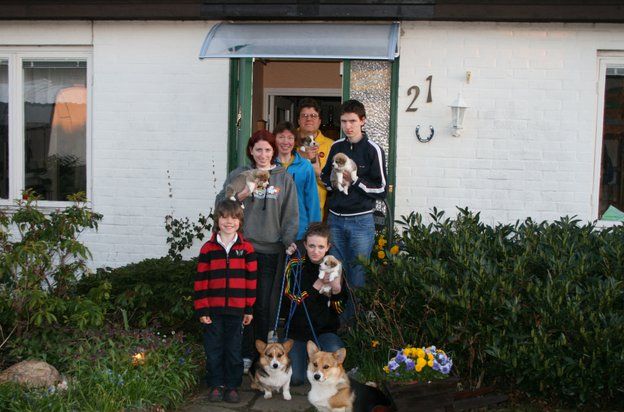 My name is Monika Johansson and I live in Kågeröd in the south of Sweden. My family consist of my husband Roland and our child  Mikael, the Corgi dogs Puksipuun Made for Zodias, called Carrie,  Zodia’s Leo, called Leo, Älvdrottningens Sky Witch, called Loppan, Cuuchin Dusty Springfield, called Dusty and Älvdrottningens Sweet Sheila, called Sheila. I have 3 more children, Helena, Mattias and Pernilla but they are not living at our home any more.

He became a show champion, obedience champion and had very high score in a mental test. We also competed in high classes in tracking and trained protection. We had a lot of fun because both of use loved to practice and compete.

Next dog was in 1990; an Irish wolfhound named Rösamaffians Chianti. She was the start of my first kennel where I bred Irish Wolfhounds and later on Schnauzers. This was between 1994 and 2000.

My next dog was therefore a Schnauzer and she came to me 1995. Her name was Flay-Goon’s Gianni.

Rösamaffians Chianti only had one litter but Flay-goon’s Gianni had two at my place and one at her breeder.

In 1997 it was time for my next dog, another Irish wolfhound; her name was Wolf Tone Mandy, she had two litters. That year I also bought a Hollander Herdeshound but she didn’t have any litters because I didn’t think she met the standard.

In 1999 I became a dog physiotherapist and in 2000 a horse physiotherapist. I worked a lot with that at that time but nowadays I haven’t got the time.

I have also become a help instructor at a dog club.

My last dog past away in the summer of 2008 and I then decided that it was time for a new breed. I didn’t want a trim breed, not a longhaired breed that has to be combed all the time, not a breed that have to work a lot to be happy and finally; a small enough dog to get in our cars but yet not too small.

I read a lot about different breeds and picked out some that interested me. My family and I went to a dog show to find out more about those breeds however my family didn’t like any of them very much. We went for a walk at the dog show and passed the Corgi rings when my daughter said: ‘-There is small dogs, can we have a look at them?’

The first dog we saw was a male Corgi who laid on his back in the lap of his owner. We spoke to the owner and after we were all hooked on the Corgi breed. Even I, despite the fact, that Corgi’s was never one of my chosen breeds.

In the winter of 2009 Zodias Leo came to our home and that was the start of a friendship with Agneta Jonsson, Kennel Zodia´s, who sadly past away in September of 2009 after a long time of illness. That resulted in that Puksipuun Made for Zodias came to us which means now we have three wonderful Corgis at our home. They have so much fun together as they play and chase each other around in the garden and are so funny to watch while they play!

And at 8:th of April our first but Carries second litter was born and there was one bitch, Lilly, and we kept her.

In March 2012 I was in England and collect Missy. That was quite an adventure.

The puppies are born in our bedroom and spend their first few weeks there. After that they are moved to a dogroom as its more space for them and they will become more like family members. By being closer to the rest of the family they naturally get used to all the noises in a normal home like vacumcleaner, TV, kitchen noises etc.

They will be delivered registered in the Swedish Kennel club, vaccinated, chip marked, de wormed, veterinary inspected and insured for hidden faults as well as getting various things like care advice to their new home.

My kennel name is Älvdrottningens; that is ‘Fairyqueen’ in English. There is a legend who says that for a long time ago there was fairy’s who had corgis for draught animals and even to this day you can see the marks of the harness on some dogs. And Queen Elizabeth II of England has corgis... and there you have my kennel name!

My main goal and focus is to breed mentally and physically healthy puppies and to find active homes with dedicated owners.

I regularly hold puppy-meetings both with old and new puppies where the whole family are welcome and I will continuously support owners of my puppies with advice, help and joyous acclamations. :-)